The long-awaited sequel to Dickinson's brutal tale of economic intrigue is a difficult but worthy instalment. 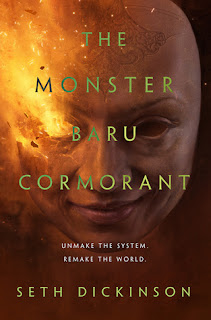 It's been three long, interesting years between the release of Seth Dickinson's The Traitor Baru Cormorant and its fair to say this long-awaited sequel, in which the Traitor becomes the Monster, has been one of my most anticipated releases of the year. The Traitor Baru Cormorant blew me away when I read it in 2015: I was still relatively new to modern adult SFF, and at the time I didn't realise that it was possible to capture this type of political and economic intrigue in fantasy. Baru's journey from island prodigy to rebel leader was immensely satisfying, as was the fact she was doing it all as a civil servant. Then, like all books, it ended, and as anyone who has read it will sympathise, it ended like that. I lost hours of sleep. If you haven't read the book and don't know what I'm referring to, let me warn you not to look for queer happy endings in this otherwise magnificent book and send you away to do what you will.

The Monster Baru Cormorant starts with a new perspective on that very scene: (really, this is your final spoiler warning) the death of Tain Hu, Baru's Aurdwynni lover, as part of her induction into the inner circle of the Empire of Falcrest (also known as the Masquerade), aka the imperial power that conquered her childhood home and ruined her life. This outwardly heartless act turns out to be the key to putting Baru beyond the empire's plans for her: the empire's elite "cryptarchs" are selected not just for their value, but for having a particular person or secret that the empire can blackmail them with and keep them in line. By refusing to beg for Tain Hu's life as she is executed (a decision which Tain Hu herself made and insisted Baru agree to), Baru becomes one of Falcrest's very few "unbound" cryptarchs, a position which unsettles and impresses the other cryptarchs around her. Her promotion also throws her into a world where, perversely, everyone is now aware of secrets she had previously guarded on pain of death, just as her peers are now open about their own secrets. In Falcresti terms, Baru is a "tribadist" -- that's "lesbian" to you and me -- a sexuality subject to severe punishment in a society that values its version of heteronormativity above all else. To make matters even more interesting, a head injury at the very end of Traitor has left Baru with dextral hemineglect, a neural condition where she is effectively "blind" and cannot pick up signals or exercise full control over the right side of her brain.

I wish I could say I had time for a reread of Book 1 before diving in to The Monster Baru Cormorant, but life is what it is and I ended up returning to Falcrest without the opportunity to refresh my memory on what had come before. Luckily, there's a slow start as Baru is inducted as a cryptarch and adjusts to her new normal in the relative comfort of the Elided Keep, which means there are enough reminders about her two-faced plan to bring Aurdwynn to the brink of victory to jump in without previous events fresh in one's mind (this recap will also help). That said, the first section of this book was far from my favourite. Perhaps it's the weird nicknames, which makes everyone sound like they should be bit players in a Warhammer 40,000 Imperium fic, and which seems out of place in Falcrest's otherwise deliberately sterile culture.

Or maybe it's the sterility itself that's the problem here. The Masquerade is a compelling villain, representing a creeping totalitarianism clothed in civilising influence, but up close it's by far the least interesting culture in Dickinson's otherwise vibrant world. Most of the time this is a feature, not a bug: by making the empire clinical and soulless when it isn't actively employing sexual violence and lobotomies to control its populations, we can't help but root more desperately for the generally more benevolent, or at least more human, cultures that risk being wiped off the map. However, it means that the scenes where Baru -- now, in a move which I really can't take seriously, calling herself "Agonist" (luckily Dickinson doesn't push this too hard) -- is getting to grips with her new role feel a little devoid of anything except relentless, unpleasant political scheming.

Luckily, it doesn't take long before Baru and some of her fellow cryptarchs, including a new-ish "friend" called Apparitor (snort) and Baru's old enemy Xate Yawa (who also now has a silly nickname that I've deliberately forgotten and refuse to look up), are sent off to the known world's remaining superpower, a federation of states called Oriati Mbo. Having subdued Aurdwynn's civil war, conquering the Mbo is next on Falcrest's to-do list, and rogue navy captains and awkward Mbo involvement in Aurdwynn notwithstanding, they'd like to do it without descending into all-out war. Unfortunately, hot in pursuit of Baru and co is Tain Shir, Tain Hu's cousin and former prodigy of Cairdine Farrier, the same older cryptarch who trained up Baru. Tain Shir, having heard of the execution of her cousin, has taken it upon herself to hunt her down and show her the "error" of treating people as disposable elements of her plans. Baru herself responds to this with a combination of intense grief and a sense of sunk cost fallacy: she has to succeed, because the woman she loves has died to make it happen. Interspersed with Baru's adventure on the high seas, Dickinson also weaves in the past and the present of a prince of the Mbo, a non-binary "laman" called Tau-indi. Tau provides a window into the culture of their people (which is much more interesting than Falcrest, because everything in this world is), and on meeting with Baru becomes the token cinnamon roll in a story that's otherwise teeming with vipers.

Once again, it's interesting to see Baru's status as an "economic savant" played out in Dickinson's well-realised world, where her toybox is the economics of empire and conquest. Now that we're past all the twisty betrayal stuff, Baru's motivations and actions are generally more straightforward and limited in scope: she spends most of the book in situations where she doesn't have the power to for kind of machinations that brought down Aurdwynn. I spent a lot of time musing on the way that Dickinson portrays political change and the impact that the cryptarchs have: Baru herself, and her mentors in this book, seem to conceptualise politics as a "great game", to the point where the cryptarchs literally have a strategy game designed to model their own world that they use to consider scenarios to bring down Oriati Mbo. In the real world, of course, the causes of political change are complex and can be modelled only in statistical probabilities, if at all - there is no way to trace causes of political change in the way that a strategy game allows. Ultimately, the narrative recognises this as well , and it becomes even more clear in this volume that Baru's ability to manipulate political situations is actually more a talent at coming up with a plausible move in any given circumstance, rather than having power over long-term outcomes. Where The Traitor Baru Cormorant was about the shock of seeing a character turn their extensive powers towards unforgivable goals in the name of protecting something even more valuable, The Monster Baru Cormorant is about watching that character come up against the limits of their own power, and what it means for someone whose reason for existence is so singularly focused towards overcoming that limit.

Whether this book will work for you, of course, very much depends on how much time you have for this particular character study, especially given the grimdark fantasy backdrop Dickinson sets it in. If you read The Broken Earth trilogy by N.K. Jemisin and maintained sympathy for Essun and the awful choices she makes in response to a world that wants to destroy her, Baru's journey may well appeal along the same lines. Interestingly, what I think sets Baru apart from Essun is her ambition, a trait which female characters (and real human people) are disproportionately punished for having. Baru is setting out to secure the survival of her people and their culture, where Essun simply wants to exist freely; does the fact that Baru's atrocities are in pursuit of that wider goal, rather than pure self-preservation, contribute to her "monstrousness"? It's a compelling question, if you buy in to what Dickinson is doing here: but this is definitely not a book for everyone. It also ends on a cliffhanger, which is honestly an enormous disappointment in a book that was so long in coming! The acknowledgements assure me that the end of Baru's journey is already written, but I am somewhat nervous about the lack of publishing date.

If The Monster Baru Cormorant lacks the "wow" factor I found in The Traitor Baru Cormorant, that's probably a reflection of where I am as a reader rather than the quality of this book. Readers who enjoyed the first will find a worthy continuation of Baru's awful adventures, with more of the same political scheming and cultural clashes that made the first book so outstanding. At the end, I feel like this review could ramble for another 5,000 words about different elements of this book (gender! hemineglect! Tau! The Lloysdanes! Xate Yawa's schemes! The Cancrioth!), and perhaps that's the best stamp of approval I can give a book like this: I'm not sure I agree with every choice it makes, but it makes me want to sit and reread and unpick it more. I'll be scheduling a full series reread before the final instalment for sure, and I can't wait to see how Baru's mission ends.

Bonuses: +0 no, you don't ACTUALLY get a bonus for avoiding more tragic queer deaths. +1 dense political worldbuilding which left me with a lot to think about.

Penalties: -0 I'm not penalising Baru for being an "unlikeable" female character with ambition either, no matter how reprehensible her means of achieving it are; -1 the slow start and cliffhanger ending make this a frustrating volume from a storytelling point of view.